LOST IN THE FUNHOUSE

in Berlin (man, I thought we left Kansas!) 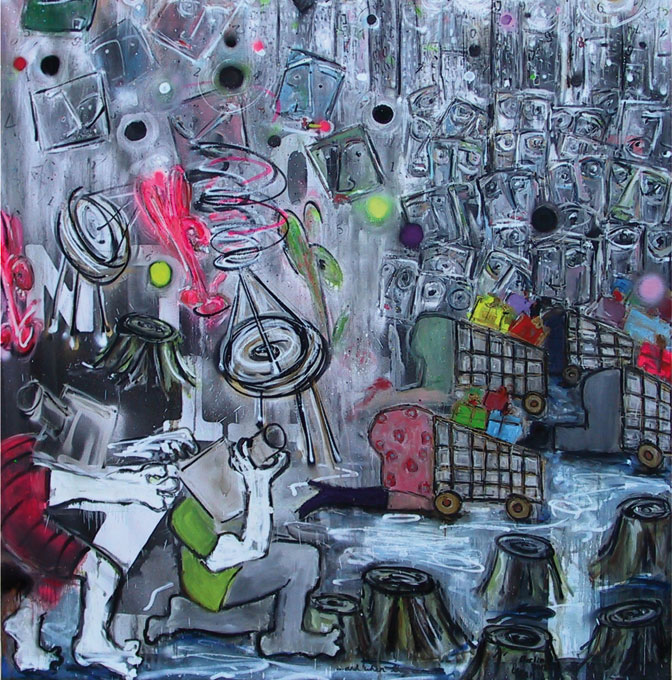 And when they came © Ivan Jovanovic

"When we packed our boxes in 2009 - myself in pursuit of some encounter that Berlin was meant to facilitate - this title 'Lost in the Funhouse' and its assumed direction was already in the luggage. It's now four years later and this part of the luggage is still being unpacked. People's lives and attitudes in big 'western' cities are increasingly feeling more alike. With today's airtravel, going around the world is sometimes like taking the subway to another neighbourhood bar. Man! Some things are simply getting too pre-packaged. Homogenity, with how-to instructions in 19 languages.

Sometimes I feel that I am falling into a bit of topicality with what I am trying to depict. But I still can't shake off the necessity that spurs it on. I hope in the least that I am improving upon my painting."

Born 1974 in Belgrade, Yugoslavia (today Serbia). At age 10 he moves to Toronto, Canada, with his family . Bachelor of Fine Arts at York University Toronto, Canada. Numerous group and solo exhibitions in Canada, USA, UK, Serbia, Germany. Since 1999 he lives and works in Toronto, Belgrade, London and Berlin.